Born and raised in the Canadian Pacific Northwest in the sixties, William Winram is a one-of-a-kind storyteller who holds several world records in the sport of freediving (breath-hold diving). Accomplished photographer, filmmaker and story teller, William is an Oceans Ambassador for the IUCN and a Fellow of the Explorers club. He is considered an expert in shark behavior, and as a natural evolution, in January 2012, he founded the Watermen Project (watermenproject.org) , an NPO where breath-hold diving is at the service of ocean conservation. Scientists are assisted in their research to understand sharks which are savagely slaughtered in the number of 100 million individuals every year. Today, William gives talks and teaches on topics ranging from risk and stress management to optimized breathing and breath-hold diving. When he is called in to support ocean research, he lends his time for ocean conservation projects around the world, as well as his commitments as Oceans Ambassador. He has been exploring the underwater world and sharing stories of his endeavors on a single breath of air for more than four decades. 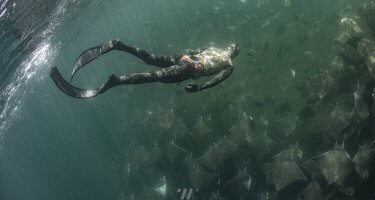 Freediving for Research and Conservation

Feediving or breath-hold diving has been around for hundreds, if not arguably, thousands of years. It is our most ancient means to enter the sea to hunt and gather that which we need. Personally, […]