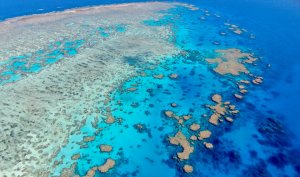 The Crown of Thorns Starfish (COTS) is a naturally occurring species on reefs within the Indo Pacific region. On the Great Barrier Reef (GBR) in Australia, COTS outbreaks driven by man-made disturbances have become increasingly prevalent over the last few decades. Whilst the species often attracts a stigma due to its predatory nature, COTS hold an important role in the maintenance of reef health. Just like other organisms found on the reef, they live, feed, spawn and perish all in fine balance with their surrounding environment. However, when this balance is thrown off, outbreaks can occur which can devastate coral reef communities across large spatial scales. Specifically, COTS prevalence on the GBR has been triggered by a combination of predator deficiencies, larval settlement success, and increased food availability from nutrient runoff. The results of these effects, in combination with increased man-made inputs, can result in a catastrophic effect to overall reef health. 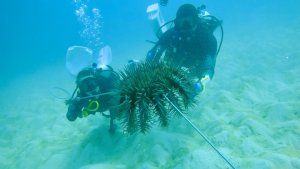 Coral is often taken as our primary metric to measure reef health simply because of its importance as a keystone species, and its scientific measurability. Foremost, it is imperative to understand that approximately 50% of coral loss along the GBR has been attributed to climate change. This includes events such as cyclones, bleaching, and pH imbalance. Another 10% can be attributed to coral disease, and lastly, an estimated 40% of coral loss on the GBR is the result of COTS predation. Whilst the statistics are ominous, it is important to acknowledge that some coral loss due to COTS predation is healthy. As corals, just like all other organisms, need to be kept in balance. A reef dominated by purely hard corals is not indicative of a healthy ecosystem. Other reef habitats such as algae, sand, rubble, rock, and sponge create niche opportunities for other organisms to thrive. By feeding on hard corals, COTS assist in the breaking down of coral skeletons to produce the above-mentioned reef habitats. By doing so, reefs which see a healthy population of the predator have increased reef diversity and therefore resilience to future impacts both man-made and natural. 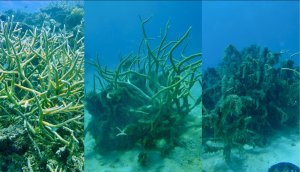 It all comes back to balance! By COTS preying on coral, other reef habitats can emerge, thus increasing overall reef diversity metrics. However, if COTS prey too much on coral communities, the main reef habitat that supports the surrounding ecosystem is impaired. The balance therefore lies in that corals should grow faster than COTS can feed on them. However, the balance between COTS and corals has been compromised for decades causing a major impact on numerous reefs throughout the GBR. To mitigate the impact, COTS control has been in effect for over 60 years. These control measures have often not succeeded, but in turn have highlighted that effective COTS control would entail a labour-intensive program. COTS control programs were established in 2012 by the Great Barrier Reef Marine Park Authority, to deliver a tactile and intensive response to these outbreaks.

Logistical and administrative work is paramount in achieving the best control program results. In order to achieve this goal, we need to find a way to tackle the more than 3,000 reefs scattered across the GBR amongst a fleet of 5-7 COTS related vessels. Marine scientists and governmental bodies work together to generate a list of target reefs based on connectivity, COTS outbreak, tourism value, cultural value, accessibility, and what seems like a million other parameters. By doing this, the COTS control program has successfully removed upwards of 300,000 COTS across the GBR over the past few years resulting in hundreds of acres of saved coral. The future impacts are exponential. Consider a reef under attack from COTS. Normally, there would be an expected coral loss of over 25%. Due to our intervention, the estimated loss is closer to 12%.

All it takes is a single 20 ml household vinegar injection to ethically cull a COTS and have it disintegrated over the following few days, becoming fish food. These achievements are enhanced using technologies such as aerial drones to map out every square inch of the reef or underwater ROVs to target COTS beyond current scientific diving depth limits (20m). The COTS control program impact is therefore not linear in its progression, but instead compounds annually at an incredible rate. 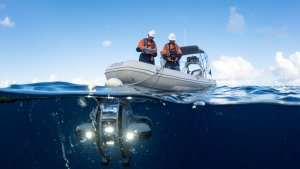 At Pacific Marine Group (PMG), the objective of the COTS control program is to protect coral on ecologically, economically, and culturally valuable reefs within the GBR using the best-available science. This is done with collaboration of government entities and in-water operators spaced across the marine park. Coordinating vessels, divers, and science led data collection, PMG divers enter the water multiple times a day over 10-day voyages to systematically cull COTS to thresholds that will allow coral growth to outpace COTS predation. Since the inception of the program, COTS numbers have significantly decreased, with reefs showing sign of recovery. In the future, it is imperative that control operations continue to strive for enhanced methodologies through innovative technologies and more efficient use of time to counteract the damage caused by COTS outbreaks. 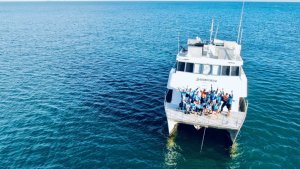 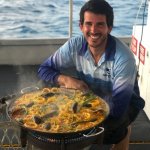 Uso is a marine biologist and project manager of the COTS control program for the central region of the GBR. He works for Pacific Marine Group Pty Ltd under the guidance of the Great Barrier Reef Marine Park Authority (GBRMPA) in Townsville, Queensland, Australia.

Having grown up in Dubai in the Middle East, Uso has come to appreciate how rapidly environments and people grow and change. Passionate about conservation Uso, along with the COTS control team, tackles the ever-pressing issues and dangers facing coral reefs. This passion stemmed from a young age swimming in the Arabian gulf with his father in the many untouched (at the time) reef systems.

His academic career led him to Indonesia where he spent 7 years working with remote communities and coming to understand how amazing and complex our relationship with coral reefs can be. Uso is also a passionate rock climber, renewable energy investor and space exploration aficionado.