How will you remember that unexpected period of time during which, for a moment, we kind of lose track of how things worked, what was safe, how to adapt, and where to go from there? 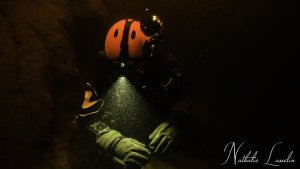 I must admit I have a fascination for uneasy environments; harsh places where you don’t see their beauty right away, when you have to find a way, your way to uncover their true identity to understand them and be able to get along with them. It might be my karma. Most of my diving is in caves, deep wrecks in dark waters with strong currents, in the arctic or doing the 70 km dive traverse along the island of Montreal.

But this time, my expedition takes me in a place where the story began a long time ago. A time where the face of the planet changed, where life was threatened, and in a way still is until now.

Some 215 million years ago an asteroid struck Earth in the middle of what today is Quebec’s largest nature reserve, René Levasseur Island. The resulting “Eye of Quebec” is visible from space - about a one hundred kilometre wide crater and one of the world’s largest astroblemes.

One day, in between shoots and expeditions, I was looking at the NASA website and was contemplating the amazing pictures of numerous features of our planet that haven't been documented from the ground. Then, I took time to look more closely at that place I was curious about for years - The Eye of Quebec! One of the features than astronauts apparently like to photograph when they pass by around here. The crater is mostly known down here as the Manicouagan Reservoir, created by one of the greatest hydroelectric projects in the 60s in Canada with the world’s largest multi-arch dams MANIC 5.

Even if I could find a fair number of pictures from space or ground, not a single image from underwater. What? How can it be? It was time for me to put together the first expedition to have a look.

Not only is it a huge reservoir of 1942 km2 but it happened to be the second-largest UNESCO biosphere reserve in Canada in the middle of the fragile boreal forest.

To go up there, we had to be completely autonomous with a boat, compressor, and the usual equipment. So, we filled my mini van with anything you can think of, towing a small boat loaded with more equipment, and tanks.

And here we go. With Mjee, my partner, and Jacques, our boat captain, driving 1000 kms to cross the 51 parallel. Driving up north is already an adventure, taking the route that goes to Labrador. ‘’The last section of the road is an accident-prone section notorious for its poor surfaces and sharp curves (the joke being you can not see your own taillights)’’.

Once we arrived, we established our base camp, fill station, and put the boat in the water. The reservoir is so big, with little access. Along the reservoir, there is a gas station and one scientific/tourist station. No town, nothing but plenty of mosquitos waiting for you. 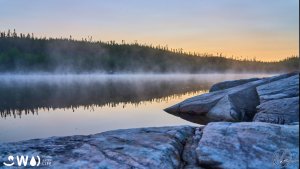 Since there is not a bathymetric map available and little information, the first day was really dedicated to seeing the condition on the reservoir. The weather was changing all the time, ranging from insane wind, heavy rain, sunshine, and clouds, and calm sections. But hey wait…. take all those elements, shake them together and spray them along the day. You never know how long it would last. It might be 5 minutes, it might be an hour.

When the sun shines, the landscape is really amazing. One road in the middle of the forest surrounded by lakes, rivers, and the reservoir in which the meteorite designed islands and other cliffs and gentle slopes. We navigated slowly in between the shoals, rocks, and unknown.

With the sonar, we started to establish our working areas. Before the flood, the old river was 150 meters below the actual water level, and the actual depth in the middle is more than 350 meters. The possibilities are endless, and most unreachable. 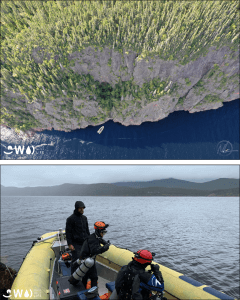 From the sonar, we could immediately see what I had expected, the submerged forest. We could clearly see fallen trees with straight ones still up. The density of the forest looked similar to the one on land. We had all the basic information to plan the first dive.

The next morning, we arrived at our first spot. We threw a small anchor and a long rope attached to a buoy. We jumped in the water, and the minute we went down after only a couple of meters, we were surrounded by dark somehow reddish water. We descended slowly with a mix of respect to the place and care. We couldn't see a thing. Pitch black. Mjee has a 60,000 lumens light, but if the light is not facing me, I just can’t see it and I just can’t believe it. Not even a pale shadow. The water absorbs it all. We reached what we thought is a standing tree. The top intact. It hadn’t been crashed by the ice as the water level was going up during the flood. There is no more cones, no more needles, but the pine looks pristine with its bark covered by sediments that were undisturbed until our dive. 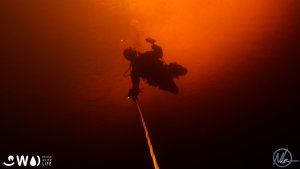 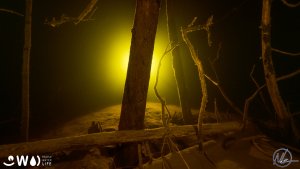 At this depth, the water becomes cold around 5 Celsius. Mjee freed the anchor and the line with the lift bag. There is no use to leave it there. It would be stuck with all the woods everywhere. We did not think we would find it back at the end of the dive and it would have been the worst idea to put a line. By the time I looked at my camera and replaced the arms of the lights already bumped by the branches, I looked up and couldn't see Mjee anymore. She just disappeared. I went 360 degrees, looked on top of me, but nothing. Then, I could feel some light in front of me. She was not even 2 meters away. Waow! At that precise moment, I asked myself, "what was I thinking?" Of course, I knew it would be pitch black, nearly impossible to communicate, but even if we had done a lot of shoots together in caves, this was so different.We continued to dive and explore, trying to see if we could reach the ground through the trees. The moment we touched anything, a thick cloud of sediment came alive and we needed to move on further away if I wanted to be able to make a single decent shot from that dive. 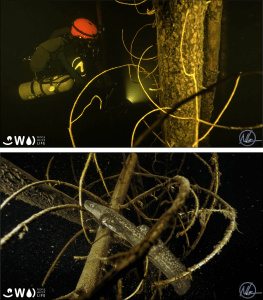 As we explored what seemed to be a spooky environment, I couldn't stop thinking about that forest that is submerged since the 70s, and somehow the resilience of those undisturbed trees.

Dives after dives, we started to understand the specificity of the land. It is more than just another reservoir, another body of water. Mjee and I found a way to better film that environment in order to reveal what we found to be amazing. 2 months after, we went back but this time with a group of multidisciplinary artists from France and Quebec. A group included a native poet, a writer, a filmmaker, a contemporary artist, a lidar expert, and our underwater filmmaking team. In this project as underwater explorers, we wanted to put into perspective the beauty of what we saw with history, geology, relation to the land, and most importantly, how we can build a better future with what we learned together by questioning and exploring our planet. Exploring the waters of the planet becomes a reconnection with the nature that nurtures us.

The project Manicouagan will be in exhibitions in France in 2022 and in Canada in 2023. In the meantime, with Mjee and a dedicated divers team, we will go back to continue the exploration of the forest in order to be able to go deeper and document the evolution of the submerged forest.

I believe all explorers share that unquenchable curiosity that pushes us to go further, deeper, longer, while learning how to cope with cold, discomfort, fatigue, doubt, and everything else that makes us keep going again and again. There must be something so enjoyable about it and there must be that moment that for so many reasons we just feel completely alive.

And going underwater does it for all scuba divers, doesn't it? 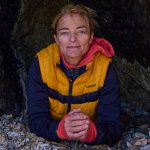 Nathalie Lasselin is a multi-award winning underwater cinematographer. As a technical diver and instructor, she has filmed and explored deep wrecks, caves and body of water in more than 50 countries including the Arctic. Nathalie pursues better understanding of our planet through documentation and shares her concern for our fresh water resources through her films and as a public speaker. Her drive is to bring people together and empower them through better relations with their own environment and ultimately for a higher quality of life. Her latest project Urban Water Odyssey embraces all her goals and philosophy. www.aquanath.com