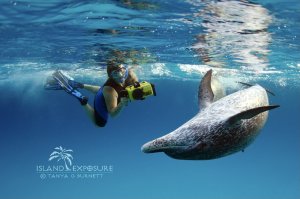 Dr. Denise Herzing has been carefully monitoring a community of wild Atlantic Spotted Dolphins (Stenella frontalis) in the northern Bahamas for an amazing thirty-five continuous years. That alone qualifies as quite a marine success story. In an age of shrinking scientific budgets and nano-size attention spans, The Wild Dolphin Project has set a new precedent for longevity of researching a specific resident marine mammal group. Dr. Herzing is preparing to take her long-term observations of complex societal behavior to another level.

The Wild Dolphin Project was started by Dr. Herzing in 1985 with careful interaction and filming of a unique pod of spotted dolphins in the crystalline waters of the Bahamas. By systematically documenting observations of both individual dolphins and their larger society over three generations, she has painstakingly created a database of visual and sociological information that is unrivalled in marine mammal science. Over the years of study, a much greater understanding has matured regarding demographics, diet, fertility, and a host of social nuances within the resident spotted dolphin population. Likewise, hundreds of hours of audio recordings synchronized to observable behavior has led to a surprisingly complex range of communication that is both audible and inaudible to the human ear. 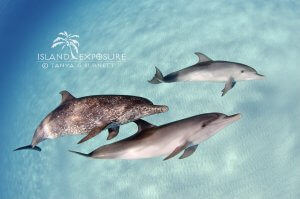 Photo courtesy of Tanya Burnett. A small pod of Atlantic Spotted Dolphins named by the head of The Wild Dolphin Project, Bishu, with calf Bamboo and second unnamed calf play during the day off. White Sand Ridge Bahamas, Atlantic Ocean.

This type of data collection requires a lot of time on the water, and Dr. Herzing is clearly as comfortable aboard her research boat “Stenella” as she is in the water with her familiar pod of dolphins. “I am more of an old-school style researcher” acknowledges Dr. Herzing. “I believe in full immersion in the environment of my subjects”. This dedication is obvious whenever wild dolphins appear on the bows of Stenella while in the dolphin grounds. Denise instantly recognizes characteristics and spot patterns of individuals and recites names as well as their familial lineage. Much of this lineage understanding was established by direct observation, but the team also developed non-invasive DNA techniques for tracking paternity and detailing the complex family and societal structures.

Thanks to the “hands off” philosophy of the Wild Dolphin Project, and the natural curiosity of these intelligent creatures, an amazing level of comfort and even voluntary interaction has occurred in this wild and natural environment. “In Their World On Their Terms” is the motto of the research project. Their underwater observations and recordings provide “an inclusive approach to analyze behavior, genetics, associations, cognition, and geography”. But, that still allows for interesting engagement where the dolphins choose to be observers and even appear to make token gestures – delivering a small clump of sargassum to a snorkeler for instance. At other times, a new dolphin mother almost seems to “present” her new calf to her familiar onlookers as an act of pride or sharing. As a human, it is easy to anthropomorphize such actions, but for scientists, objectivity must remain forefront. It is this professionalism and dedication that ultimately has led to such a useful body of work. 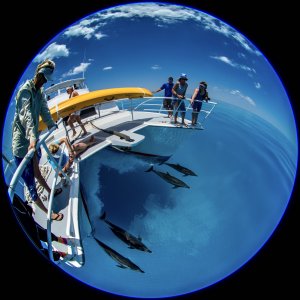 Perhaps the most unique success of the project has been documenting what a stable and healthy pod of dolphins this Bahamian group has turned out to be. With so many cases of mysterious marine mammal deaths, groundings, and sickness, it is a welcome surprise just how consistent and successful the research subject pod has been. “Compared to problems many dolphins around the world deal with, I feel fortunate to work in such a unique environment” remarks Dr. Herzing.

In fact, the single greatest stressor during the 35 years of study was the back to back storm system in the years of 2004-2005. There was a loss of pod members after the storms, some returned, while others did not. But, since that time, the pod has been recovering and numbers are growing stronger. Perhaps there are lessons to be learned from this group that can be beneficial to understanding some of the still unsolved problems that other marine mammal species are suffering from.

So far during this Covid-19 pandemic, the project was only able to complete two field trips due to weather and the closure of the Bahamas to commercial vessels. Though they only conducted two trips, they were very productive. During the trips, the team encountered dolphins they had not seen in years, they met new calves of females, and they recorded valuable footage of behaviors and possibly new formations of male coalitions. Each field expedition is extremely important to track the changes that are happenings with the environment, food sources, and attempting to track the whereabouts of all the known ID'ed subjects. They track who the dolphins are with, if the females have calved, and where they may be found more frequently and why.

Now, there is new trouble afoot as the Bahamas is poised to drill oil in huge sea acreages by the end of the year. The impact could be severe to the environment, and detrimental to the food stocks of the Atlantic Spotted Dolphin. The natural environment of the Bahamas and the East coast of Florida are now at at potential risk, and the thought of a repeat of the Deepwater Horizon event from 10 years ago that devastated fish stocks and created all kinds of marine environmental problems, is hard to digest.

The hope is by summer of 2021, Dr. Denise Herzing will be able to resume her research in full force. She hopes to once again voyage to her beloved dolphin grounds, and her efforts will be renewed with fresh techniques and technologies at hand. Enthusiastic cetacean biologists and volunteers will once again be by her side to support this epic project that will hopefully bring benefits to humans and dolphins alike for many generations to come.

Tanya Burnett is a Nikon professional photographer, a Nauticam housing Ambassador, a member of the Women's Diver Hall of Fame, Ocean Artist Society, a PADI Instructor a TDI Technical Instructor, and an experienced Expedition Leader with unbridled enthusiasm to share ocean experiences and help you create beautiful captures. She has been an independent photojournalist and occasional field editor for over 20 years. She has authored and co-authored over 100 articles in magazines, newspapers, books, and online.

Tanya is on the community advisory board for The Wild Dolphin Project, where she has assisted by capturing critical images for the ongoing studies of the Atlantic Spotted Dolphins in the Bahamas. In 2010, she was part of a WINGS World Quest expedition and in 2011 also has documented imagery of an expedition carry the Explorer’s Club Flag. She currently resides in Florida with her husband Kevin Palmer. Their West Palm Beach office is the base for their companies Island Exposure Inc and Calypso Sea that features Tanya’s eco-chic ocean inspired jewelry line.