Oxygen is necessary to sustain life, but it plays a more complex role in diving safety. Increased fractions can improve decompression efficiency by reducing the inert gas fraction of inspired gas, and a high partial pressure of oxygen (PO2) is a staple in the treatment of decompression sickness. Problematically, however, too much oxygen can also create health and life-threatening toxicity. This article is drawn from a longer review of the topic (Pollock 2019).

Pulmonary oxygen toxicity involves irritation of lung tissue caused by prolonged breathing, often for many hours, of substantially elevated oxygen concentrations. This can develop with a PO2 as low as 0.5 atm given sufficient exposure time. Signs and symptoms include persistent unproductive cough, a sense of tightness in the chest or discomfort during inspiration, and pain behind the sternum. Mild symptoms typically resolve without consequence in the hours following a return to air breathing. One of the reasons that immersion pulmonary edema (IPE) may be missed is that mild symptoms can be attributed to pulmonary oxygen toxicity. 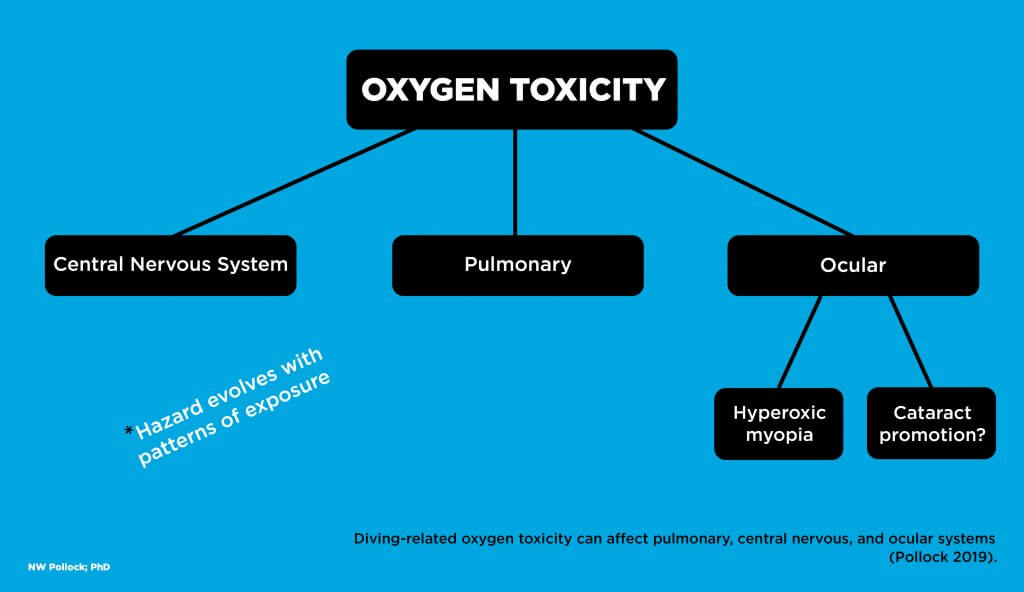 Central nervous system (CNS) oxygen toxicity involves an insult to the brain caused by exposure to higher PO2. This can develop after relatively short periods given high enough values. Signs and symptoms include twitching of facial muscles, tunnel vision, nausea, paresthesia, unconsciousness, and convulsions. Subtle manifestations may appear first, but cases can evolve rapidly or immediately present with fully incapacitating effects. The risk for CNS toxicity increases beyond a PO2 of 1.3 atm (Arielli et al. 2006). CNS toxicity represents a substantial threat since a loss of consciousness underwater is accompanied by a high risk of drowning.

Ocular oxygen toxicity is another possibility. Hyperbaric myopia (nearsightedness) can develop in both patients receiving hyperbaric oxygen (HBO) therapy and divers exposed to high PO2. This condition requires repetitive exposure over a fairly short period. It is increasingly likely after 15 or more HBO sessions and can develop at a variable rate with divers breathing high PO2. The visual changes typically resolve fully within the weeks following the end of exposure.

A more worrisome form of ocular oxygen toxicity involves the promotion of cataracts. Cataracts usually develop as a progressive cloudiness forming in the lens of the eye, producing blurry and impaired low light vision. Cataract formation is generally not reversible, ultimately requiring surgical replacement of lenses. The appearance or acceleration of cataracts has been reported in HBO patients. There is little firm evidence to date, but there are legitimate concerns that frequent and long duration dives at high PO2 could create a cataractogenic risk for divers. This is a good reason for additional mindfulness regarding oxygen exposure.

Oxygen toxicity is less of a concern with open-circuit diving since peak PO2s are generally breathed for relatively short periods. It is a critical consideration in closed-circuit rebreather diving as high PO2 is maintained at a "setpoint" throughout most of dives.

A high PO2 setpoint is desirable to reduce decompression stress on divers. The higher the setpoint, the less inert gas will be taken up during the descent and bottom phase, and the more that will be eliminated as the diver ascends, particularly in the latter part of the ascent. The PO2 of air breathed on open-circuit is 1.3 atm at roughly 52 msw (171 fsw). A closed-circuit rebreather operating on a fixed 1.3 atm PO2 setpoint would deliver a progressively lower inert gas partial pressure from this point through the ascent. With a PO2 setpoint of 1.6 atm, a rebreather diver would inspire virtually no inert gas at a depth of 6 msw (20 fsw), producing a steep gradient for inert gas elimination.

Minimizing decompression stress is important, but oxygen toxicity is also a critical consideration of high PO2. It is tempting to downplay concerns of acute high PO2 when HBO therapy used to treat decompression sickness can expose patients to a PO2 of 2.8 atm, but there are critical differences that reduce the CNS toxicity risk in a dry chamber. HBO treatment includes scheduled air breaks to reduce the likelihood of adverse reaction; patients remain at rest; and, most importantly, a patient convulsing in a chamber can be simply managed by removing the oxygen mask or hood and clearing the airway as required.

Divers in the water face much greater hazard with any impairment of consciousness. Self-rescue capability is lost and rescue by others is far from assured. Full-face masks or mouthpiece retaining straps reduce the likelihood of losing the mouthpiece, but they do not address the airway compromise associated with vomiting into a mouthpiece or the loss of buoyancy control. The threshold for seizures may also be lower in the water, driven by exercise, rising arterial CO2 (associated with exercise or inadequate CO2 removal), increased work of breathing, general stress, cold (or cool) stress, and a wide range of medications or drugs that divers might use without being aware of potential interactions.

The PO2 limit of 1.6 atm has a long history in scientific, occupational, and technical diving. There is, however, a broad shift in practice towards more conservative bounds. The default high setpoint on many modern rebreathers is 1.3 atm. It is not uncommon for lower PO2 setpoints to be used for part or all of long exposures. Both the US National Oceanic and Atmospheric Administration (NOAA) and the Canadian Standards Association Z275.2 committee reduced the maximum PO2 during the working phase of dives from 1.6 to 1.4 atm in 2015, coming closer in line with the standard 1.4 atm PO2 recreational limit.

PO2 limits should reflect a compromise between the benefit of reducing decompression stress and the hazards of oxygen toxicity. A reasonable risk-benefit balance can be achieved by moderating PO2 during the deep phase of a dive where the absolute reduction in inert gas uptake is modest and the life threat from compromised consciousness is extremely high. A lower setpoint at depth would allow more flexibility to increase the PO2 during the shallower portion of the ascent where the decompression benefit of high PO2 is great and the life threat of compromised consciousness is somewhat reduced. Moderating the total oxygen dose (a function of concentration and duration) may offer some protection for all forms of toxicity, including potentially serious ocular effects. 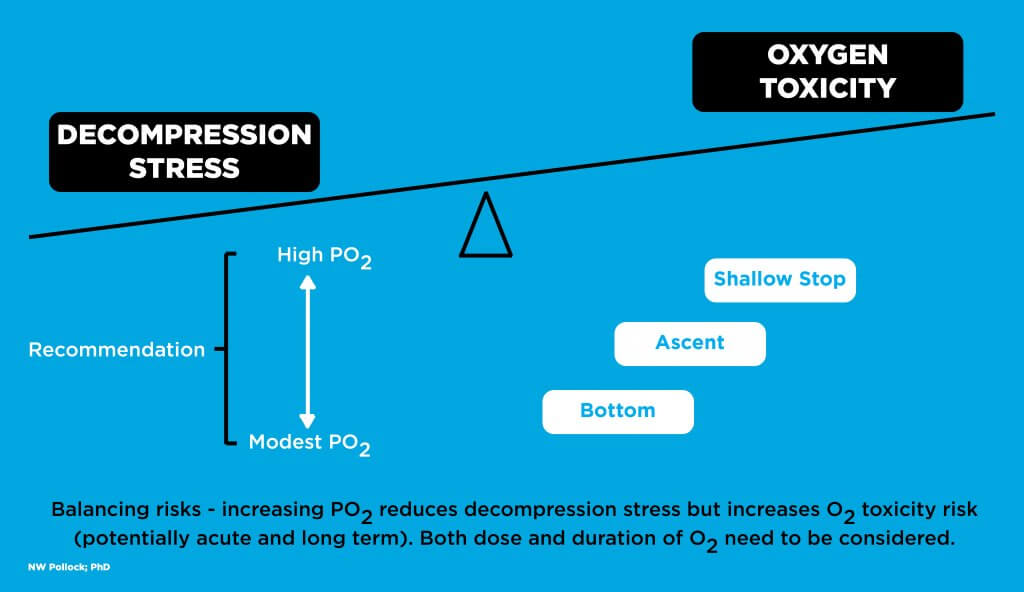 The argument that the 1.6 atm PO2 limit has been well-tested through time is not fully valid. The existence of a limit is immaterial unless a large number of exposures are made to the limit. Exposures conducted partially or wholly at lower PO2 will not provide insight into the safety of higher PO2. There is a sufficient combination of documented evidence and theoretical concerns to encourage the use of modest PO2 limits to ensure safe exposures and to potential avoid long term risks.

More research is needed to better understand both the hazards and benefits of high PO2, and the wide variability of risk between individuals and between exposures. It is difficult to conduct research on potentially high consequence events, but the diving community can help by reporting details for all cases of oxygen toxicity, regardless of the severity or of the outcome. Extensive data are required to refine the guidance and to develop the capabilities of monitoring systems.

High PO2 offers both benefit and risk to divers. A reduction in decompression stress must be balanced against an increased risk of oxygen toxicity. Change in practice has led to some decrease in PO2 norms, but further research is needed to better understand variables that affect susceptibility to oxygen toxicity and the severity of outcomes. Additional information will almost certainly prompt further refinement of guidelines and practice.

Neal Pollock is an Associate Professor in kinesiology at Université Laval in Quebec, Canada. His academic training is in zoology, exercise physiology and environmental physiology. His research interests focus on human health and safety in extreme environments.