Divers should know that while the decompression algorithms in dive computers are great at measuring pressure-time profiles, they are blind to a wide range of variables that affect decompression risk. The approximation of decompression status predicted by current deterministic algorithms should not be confused with 'truth,' even though they can provide reasonable guidance under normal circumstances of relatively conservative exposures. The next problem is determining what is really 'conservative.' The complex interplay of exposure, individual status, and individual response makes it difficult.

Divers who understand the inherent uncertainty in decompression modeling and want to take a more active role in their own dive planning can use available tools to tailor the limits to their needs or preferences. This is a good choice for dynamic conditions or complex dives, when the goal of simply staying away from limits gets hard to track. Gradient factors represent a good tool to actively manage risk. This article complements a more complete review of the topic.1

Decompression stress is largely determined by inert gas uptake and elimination. The dive profile is clearly the chief determinant of this, but thermal status and exercise intensity at various phases of a dive can have major influence. Individual characteristics, which can increase or decrease susceptibility to insult, play a complex wild card role. Since people rarely know their sensitivity, on either a chronic or an acute basis, there is an element of chance in the safety of any exposure.

Half-times, tissue compartments, and M-values are described in more detail in the article mentioned previously.1 Briefly, half-times mathematically describe the rate of inert gas equilibrium during exposure to elevated or reduced pressure. Each half-time represents a theoretical tissue compartment construct, not an actual tissue. A range of half-times, covering fast through slow equilibration, is used to predict uptake and elimination of gases throughout the body. Supersaturation is the state in which the gas concentration (tension) in a tissue is higher than the surrounding pressure. Supersaturation exists when a diver ascends and the ambient pressure falls.

The term 'maximum value,' or 'M-value,' was coined to describe the theoretical level of supersaturation a tissue can tolerate before an orderly elimination of inert gas is replaced with a disordered outcome. Individual tissues may have different M-values and, in the fundamental sense, the disordered outcome in any tissue can be thought of as a decompression insult.

Experience has shown that bubbles can form and decompression sickness can develop when supersaturation is within established M-value limits. This indicates the imperfection of simple limits. In response, many dive computers offer some degree of user-selectable conservatism. Conservatism can be important for both physical safety and psychological comfort. The person who believes himself or herself to be bends-resistant may be happy with settings that would not be comfortable for a person less confident about being bulletproof or one simply wanting additional peace of mind.

The actual effects of conservatism schemes are often poorly described by manufacturers or marketers. Some even include poorly thought out descriptions of conservatism levels that play on the vanity of divers, with potentially adverse effects on decision-making. One conservatism construct, gradient factors, stands as a method that is fairly easy to understand, easy to quantify, and relatively free of descriptive bias.

Gradient factors, in the simplest sense, allow exposure limits to be adjusted to become a fraction of other limits. The mathematical power of dive computers allows numerous half-times to be tracked simultaneously, letting any that reach the assigned limit become the leading, and effectively the controlling compartment. Gradient factors are commonly applied to the Buhlmann algorithm, a well-researched set of decompression procedures that were openly released to the community. The open release allowed for all aspects of the algorithm to be studied carefully by many who ultimately contributed to corrections in subsequently revised versions.

Gradient factors are typically applied in two steps. The first number (GFlow) represents that percentage of the M-value used to determine the first stop during ascent. The second number (GFhigh) is the percentage of the M-value that cannot be exceeded at any point during surfacing. The dive computer effectively draws a straight line between the two, creating the ascent slope. The alteration of limits is applicable to both technical and non-technical exposures. 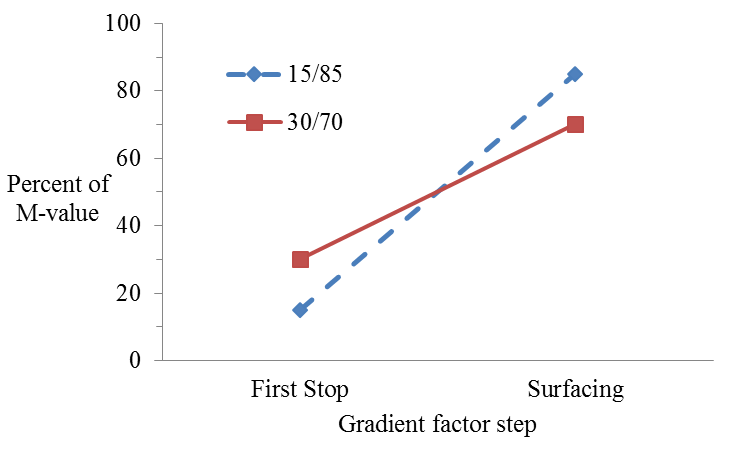 Fully adjustable gradient factors, which includes the ability to change GFhigh during a dive, provide a great deal of control. If an unexpected amount of work or excessive warmth was experienced during the descent or bottom phase of a dive, GFhigh could be reduced to prolong the ascent. If part of a critical gas supply was lost during the dive, GFhigh could be increased to expedite the return to the surface. 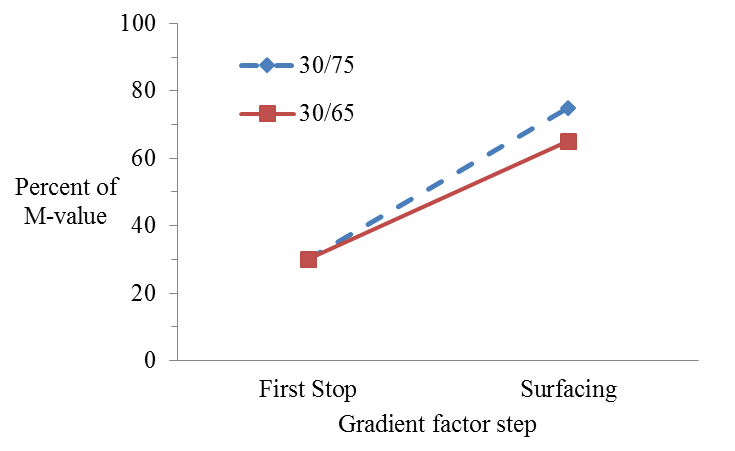 The thoughtful and well-informed diver knows that conditions during a dive affect real-time risk. Having a dive computer that can help manage exposures to keep them within zones of comfort can also help ensure good outcomes on every dive.

Neal Pollock is an Associate Professor in kinesiology at Université Laval in Quebec, Canada. His academic training is in zoology, exercise physiology and environmental physiology. His research interests focus on human health and safety in extreme environments.