The world is at a crossroads, but today we have chosen the way forward. "We will transform the way we live, from reducing our reliance on single-use plastics to placing sustainability at the heart of all future development." Siim Kiisler, President of the Fourth United Nations Environment Assembly Environment (Nairobi, March 2019).

Today, the oceans cover seventy-one percent of the Earth's surface, being sources of life for our planet. However, global warming has caused a rise in sea level in coastal areas, which is leading to the loss of habitats and entire ecosystems (mangroves, deltas, and large frozen areas of the Arctic are an example). Additionally, the over-extraction of marine resources and the deterioration of marine health due to garbage and acidification, endanger the continuity of many species.

According to IUCN data, each year, eight million tons of plastics end up in our seas. The "Sea of ​​Plastic" report sets in 100,000 the number of marine animals that die each year from the ingestion of plastics. In seas with little openings, such as the Mediterranean, the figures are even more dramatic. Marine biologist and National Geographic explorer, Manu San Félix, denounces in his documentary "Let's Save the Mediterranean", that our beloved sea is the most polluted on the planet. It accounts for between 20 and 40% of all micro-plastics in the earth.

As Antoine de Saint Exupéry said, 'as for the future, it is not about predicting it, but about making it possible'. Buceo por el medio Ambiente is the tool that will allow us, thanks to all the volunteers and collaborators, to make possible the cleaning of our seabed and help future generations have the privilege of enjoying clean oceans full of life.

Diving for the Environment, Diving to discover, diving for fun, or…. All in one?

BUCEO POR EL MEDIO AMBIENTE is a non-profit project where volunteers passionate about the sea fight against the degradation of our coastlines during the last few decades. Coastlines in which some of our volunteers learned to swim or dive, but even more importantly, to respect the oceans and the life they host.

INDRA UNDER WATER is a diving club that was created with the aim of showing the employees of the Indra company the underwater world in all its forms.

The idea is to show the more than 30,000 employees of the company the different varieties of existing diving and promote training activities for those interested; both active divers and people who are not. In the club, non-divers can join this world underwater, while those who already dive can continue to evolve their path to reach other levels of diving, such as technical diving with Trimix, cave diving, and freediving. The club encourages this type of training activities and conducts testing and dissemination of all these types of activities, whether technical or recreational. 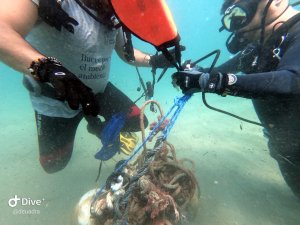 The action has been promoted by Indra, through its Change from the Core Project. More than 30 volunteers from different provinces of Spain arrived at the Greenwich Marina on Friday, September 18, prepared to make multiple dives in the marine area of ​​the Serra Gelada natural park. 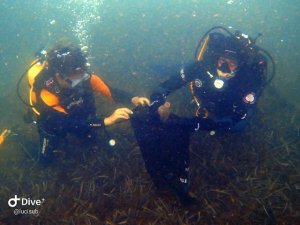 On Saturday, August 19th, our volunteers focused the marine cleaning actions in the bay of Benidorm. From there, several boats took the divers to three dive sites, while another team of volunteers remained in the port of Benidorm, cleaning the pontoons and the entrance.

The teams performed cleaning activities in these areas, and they were able to recover 800 kilos of garbage that they took to the port for its correct management and for the recycling of some of the recovered waste.

After cleaning the seabed of the Serra Gelada natural park, the volunteers visited the terrestrial part of the park, with a guided route where they learned about the ecosystems and the great geological value of this natural space. 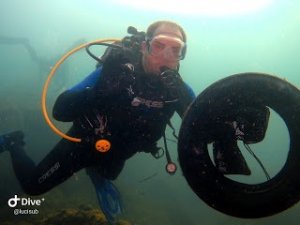 On Sunday, August 20th, all volunteers focused our efforts on the coast near the Greenwich Marina and on the port itself. Once again, organized in different teams and coordinated to cover the largest possible surface area, and together with the support of the security boats, we recovered 1,000kg of garbage deposited in the waters off this coast.

Thank you to all the companies that have made it possible for us to remove 1,800kg of marine litter from our coasts. And, again, thanks to the local authorities for their support and, above all, thanks to our volunteers for their spirit of collaboration, solidarity, teamwork, and for believing and participating in our seabed cleaning days.

From the 2nd to the 4th of October, 10 divers had the pleasure of leaving behind the diving that they knew and decided to learn freediving and cave diving.

Hand-in-hand with Divergente Diving and Inmaculada Marin Millán, a great adventurer who makes a difference in whatever she does, we went to La Azohía. A small fishing village in the Murcia region that houses a handful of good secrets to discover. both within the sea, and outside it.

The weekend presented with good expectations and did not disappoint. The group arrived on Friday, and we found that the usual paradise of the Azohía, with its calm waters, had been transformed into a roaring and rough sea that invited us not to disturb it, at least for a few hours. But we don't give up easily….

Given these circumstances, we decided that we would change our plans. On Saturday morning we tried some dives, but given the weather conditions, poor visibility, and the water temperature, we only did one and then the group decided to cancel the second and receive a DIR configuration briefing for technical diving and then a freediving lesson.

Said and done, who said fear?

Once the secrets of the material used in caves and the minimum techniques for diving in them were known, the divers traveled the few meters that lead to the cave, and began to observe how the certified divers prepared to enter said cave. They would try to enter the next day.

This famous cave, of hypogenic origin, gives us the opportunity to explore an extensive, labyrinthine and very technical cavity, in slightly acidic water of thermal origin which has a constant temperature of 29ºC at 6m depth. The surface changes little from 22ºC.

With more than 3000m explored and a main line of guide wire that runs its more than 1500m in length, its technical complexity, the ease of muddying due to the sediment of the bottom and the perforation of the roof, and the large number of navigation possibilities, it's essential to earn specific training and certification for cave diving.

On this occasion, the Indra divers watched carefully as the certified divers installed the line that they should follow the next day on their tour of the cavern, the outermost and least dangerous part of the cave.

Time to Relax…. But not too much!

After the walk to the cave and seeing how the divers installed the line that we would use next day, the group went back to the diving centre and began with a freediving seminar, beginning with relaxation techniques where they could see that the world of freediving is not a suffocating and stressful world, full of bad sensations.

On the contrary, the basis of Freediving is good relaxation that allows you to isolate yourself from the outside world and be aware of your body by focusing on something as simple and everyday as breathing. Maintaining adequate breathing for a few minutes, relaxed, disconnected from the outside world, with no other stimulus than quiet background music, can make your body experience sensations close to sleep even when awake.

The goal of this session was to bring the students to this state, and we succeeded. All the students left with a great feeling of well-being and reached their maximum time without breathing, this time in dry environment. Everyone spent more than 90 seconds with some two minutes holding their breath. Everyone came out of the experience willing to apply these techniques in the sea, and to be able to descend with the freedom of not wearing more equipment than fins and a mask. However,  we left that for the next chapter.

On Sunday with better weather, but with the sea still not in optimal surface conditions, we decided to go out to one of the star dives in the area. The Arch. Without a doubt, the dive did not disappoint. The sea was rough with waves, but visibility had improved a lot compared to the previous day, and underwater there was a good portion of gusty currents. Every good diver knows that these currents often make for more underwater life. Schools of barracudas, groupers, tropical groupers, Bonitos, and Albacoretas roam free to hunt down the small ones in the area. The massive schools are at their maximum numbers this time of year. Without a doubt, a real show.

After getting out of the water and having prepared it the day ahead, we went to allow the students have their first experiences in the Cueva del Agua, with its very cozy temperature of 28ºC, compared to the 16ºC in the sea.

Cave diving is one of the most risky diving activities. Adequate training, materials, and skills are always necessary. In our case, when it comes to a cavern, we will always go with the supervision of experts.

Preparing at the entrance to the cave. Photo courtesy of Miguel Muñoz.

In this cavern you never lose sight of the impressive light that enters the water at the entrance to the cave. The corridors are wide enough so that several divers can navigate together, although always having maximum awareness of the situation.

The situation from the outside can be imagined in many ways, but surely the experience of being inside is unmatched, and cannot be fully described in words. Unfortunately, when doing a preliminary reconnaissance of the area, the guides observed that the visibility of the area was not adequate for a first visit, so it was decided to cancel the dive.

Preparing at the entrance to the cave. Photo courtesy of Miguel Muñoz.

Once again, the participants have taken the bait and are eager to hone their skills to be able to make more frequent visits to this submerged wonder that we have in the Murcia region. It is time to collect and plan another weekend away where participants can finish what they left incomplete. Their freediving course and their first dive into the dark side… at La Cueva del Agua. 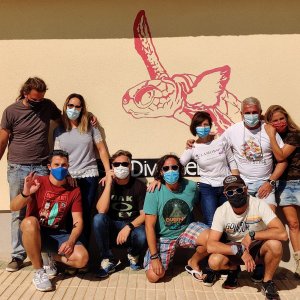 Everybody is happy and willing to come back. Divergente buceo dive centre and Inma marin. 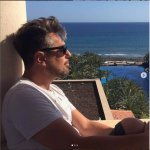 Miguel Muñoz is passionate for the underwater world in all its senses. I studied Aeronautical Engineering in the Polytechnic university of Madrid and dedicated my professional life to aviation for more than 25 years. I am currently managing the STARTICAL project to launch a constellation of satellites in space that provides communications and surveillance services for air traffic control. In my day to day life, I share my familiar life with underwater life, directing the diving club of my company that is formed by more than 250 buddies, in order to help them and guide with diving training and also organizing diving trips of all kind, it is with the aim of discovering marine fauna, take care of the environment, receive recreational or technical training or simply enjoy the underwater world.