The Tragedy of the US Navy H1 Submarine

In 26 February 1920, The Great War has ended and the US Navy’s Submarine H-1 (ex Seawolf) with her sistership USS H-2 and their escort USS Eagle 11 had just transited the Panama Canal into the Pacific and begin the last legs of their long journey home to San Pedro, California.

H-1 was a coastal patrol submarine over 150 feet in length, and displacing over 400 tonnes. She was carrying 4 Bliss Levett MK 7 torpedos, and was manned by a skilled crew of 25 men. The crew was lead by 26 year old US Naval Academy graduate Lieutenant Commander James Webb, the Executive Officer Lieutenant Jenkins, and Chief Gunner's Mate (Torpedoes) Albrecht.  H-1 has been underway intermittently since departing Norfolk, Virginia in January, the men enduring cramped quarters were likely anxious to get back to home port. 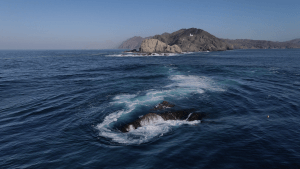 The little convoy worked their way north calling at several ports along the way. On the night of 12 March 1920 the submarines were seeking the shelter of Bahia Magdalena. They and their escort had been plagued with engineering problems. Eagle 11 had lagged behind to get water for her boilers from another ship. Night had fallen and seas were a bit rough. H-1 was leading H-2 into the smooth waters of Bahia Magdalena to wait for Eagle 11, rest, and replenish supplies. Webb cautiously began his approach to the entrance of the bay. Just after midnight, he called Chief Albrect on deck to take soundings. Chief Albrect cast the sounding lead several times and found no bottom at seven fathoms. Confident he was in the proper channel, LCDR Webb sent Chief Albrect below. The Chief returned to the bridge with a cup of coffee and the Captain asked if he saw an opening ahead. Before he could answer, the boat struck bottom and rolled heavily on her port side. Webb ordered the electric motors reversed, but the circuit breakers opened on overload. He quickly signalled H-2 of the danger and she narrowly avoided running aground. Waves began breaking over the bridge, and knowing that the boat was lost, LCDR Webb ordered all hands into life jackets and to abandon ship. 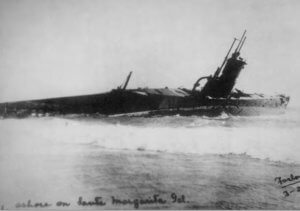 The H1 Submarine stranded on the beach Isla Santa Margarita.

The Captain was last observed directing his men from the conning tower when a wave crashed over the bridge and when it receded he was seen in the surf. Although a strong swimmer, he did not make it ashore and his body was never recovered. The men that survived the surf faced a cold night on the windswept beach and buried themselves in the sand for warmth. They recovered the bodies of Petty Officer Giles and Seaman Delamain, and buried them above the tide line. After searching in vain for LCDR Webb and Seaman Kosman, the crew walked north along the western side of the island.

On seeing H-1’s signal, H-2 veered away and made her way seaward but was helpless to assist the H1 during this event. Submarines carried no lifeboats and the risk of bringing the submarine close enough to pass a tow line would have placed more lives in peril. H-2 notified Eagle 11 of the grounding and directed her to steam into the bay to look for survivors.

A radio message was forwarded to headquarters reporting the incident. Headquarters sent an immediate message to all stations asking for assistance. The civilian steamer SS Mazatlan was in the area and agreed to help in the search for the crew. Initially told that her services were not needed, she passed near the island and continued north. H-2 later contacted Mazatlan and requested she return as the men had not been located. She arrived at the island on the afternoon of the 13th and quickly spotted the survivors. A boat was lowered and the bedraggled and sunburned survivors brought aboard. Mazatlan departed the island and brought the men to San Pedro.

The fleet tug USS Sonoma attempted to pull the submarine free off the beach but did not have the salvage gear necessary. The Navy dispatched the repair ship USS Vestal and minesweeper USS Brant. Working together in a building storm on the morning of 24 March, they were able to free H-1 from the sandbars grip.  After days of being beaten by the sea her watertight integrity was compromised, likely opening a riveted seam in her engine room rapidly flooding the submarine. Scarcely an hour after being towed off the beach she was sitting on the bottom in 60’ of water.

The Navy considered salvaging her, but given her age and potential for further service, struck her from the Navy Register on 16 April 1920. On 25 June she was reported as sold for scrap, and all evidence of her whereabouts were erased.

On April 17, 2015 a local fisherman from Alcatraz, Isla Margarita Omar “El Camaleon” Lucero, while setting lobster traps off the Pacific coast of Isla Margarita along with his companions Mauricio “El Churri” Gonzalez and his son Jesus, snagged a trap on a structure 60 feet below the surface. Jesus was dispatched to untangle the trap and surfaced with a claim that there was an airplane on the bottom. El Churri and El Camaleon made a quick descent and identified the structure as a submarine. For days they kept their discovery a secret and pilfered the wreck of brass fittings, the compass, its clock, the periscope, and sold many of the artifacts as scrap. When they finally revealed their discovery, word spread quickly of the presence of the submarine, and other fishermen unaware of her historical importance, participated in stripping the wreck of valuable brass and copper fittings. 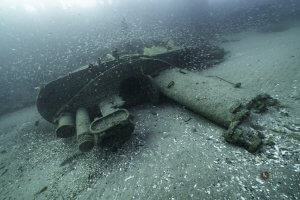 The Conning Tower of the H1 Submarine. Photo Courtesy of Luis Sanchez.

This is where I enter the scene. I have been working with INAH Marine archeology division for the better part of 30 years and most recently thru my newly established Foundation. I founded The Kaxaan Nautical Foundation, whose mission is to promote preservation and conservation of Nautical Heritage thru discovery, exploration, and community engagement. In October 2019 I made my first exploratory dive team along with retired US Navy submariner and Maritime Archeologist Dr Richard Hendren, and leading archaeologists from Mexico’s Marine archeology division of INAH. What we discovered was a wreck that had suffered badly and needed protection. We developed a plan with the local fishing community of Alcatraz for her preservation and protection. The plan was to be executed in phases including: removal of all fishing traps and debris from the site as these can become a hazard to future visitors, laying a memorial plaque to commemorate the lives lost during the tragic events of 1920, establish a permanent mooring line for future visitors to tie off to preventing anchoring damage, removal of the 4 torpedoes by qualified naval demolition experts & establishing a small community nautical museum in Alcatraz to develop sustainable tourism, and to promote the regions nautical heritage. That's the theory. The reality has been much more challenging as we have battled permitting issues, the covid pandemic, and the uncooperative weather of Bajas Pacific coast. 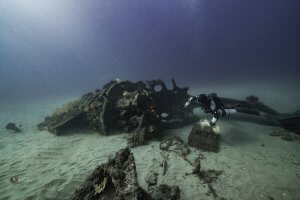 This past December, we returned to the wreck site and fulfilled our task of removing all remaining lines and traps from the structure - mission accomplished. My alma mater, Indiana University and its school of Marine Science under the leadership of Charles Beeker, established the H1 wreck site as a Living Museum of the Sea. They provided a memorial plaque, a historical marker, and divers who joined our technical dive team and were ready to execute the task only to be advised that we also required permit from the Mexican Navy as they carried jurisdiction over the Island and its surrounding water based on a 1950 federal decree establishing Isla Margarita as a military installation. Part of me wanted to accidentally throw the plaque overboard, but cooler heads prevailed and we are now in the process of securing the Naval permit and will be returning to lay the plaque and the historical marker with docs in hand. 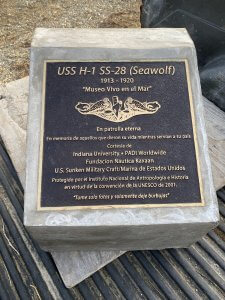 Though the process has been frustrating at times, when I consider the impact our engagement with the village of Alcatraz has had, it makes the struggle worth the effort. Alcatraz is a small humble fishing community on Isla Margarita with 39 families. There are approximately 25 children on the island, there is a church, a small elementary school and kindergarten, a desalination plant, and a small clinic to tend to the needs of the community. It is our hope that the small community nautical museum under construction will help establish a sustainable tourism model, bringing tourists to learn about the awesome biodiversity & nautical heritage in the area. 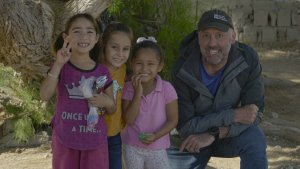 This community has housed my team on 4 separate expeditions, often feeding and housing us with their families - they have become lasting friends. If this type of work is of interest, please reach out. Let your diving and exploration have an impact. I cannot promise you 5 star accommodations. In fact, many times you’ll sleep in a hammock and you will not order off a menu, but Dona Rosa will prepare a wonderful fish taco meal, you will be assigned a job including hauling gear, filling tanks, and prepare meals. But, I know your engagement and your diving will have and make a profound impact on a marginalized coastal community as you integrate and become part of our Kaxaan team. 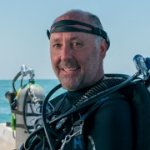 Peter Tattersfield is the founding Director of Kaxaan Nautical Foundation whose mission is to inspire nautical preservation thru exploration, discovery and community engagement. A dual citizen of Mexico and the United States, he holds several technical diving certifications including Instructor and has been working with the Instituto Nacional de Antorpologia e Historia marine archeology division for 30 + years. Has participated in numerous expeditions of discovery including the Lost Fleet of Cortes of Veracruz, The H1 Submarine off Baja, and the Don Manuel Polanco Galleon on Chinchorro Reef.