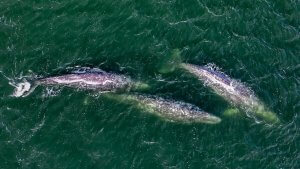 The Eastern Distinct Population Segment (E-DPS) Grey whale (Eschrichtius robustus) was once ubiquitous. Today, somewhere between 22,000 and 27,000 greys are believed to exist, but that number, which fluctuated during the whaling era, may be headed lower today due to a number of climate change and prey availability factors. While the Atlantic population of greys is functionally extinct altogether, the remaining greys now exist in the Pacific, with a smaller, Western Pacific ecotype roaming the waters off the Russian coastline.

But since 2019, an unusual mortality event (UME) has plagued the E-DPS population. Project SeaWolf, a non-profit group operating out of Western Washington, USA, has been supporting the work of grey whale researchers in trying to identify and forecast the viability of this population. Applying the unique capabilities of our research, hovercraft ‘Hekate’, along with other vessels that can successfully navigate shallow feeding grounds, and even mud flat areas, our recent focus has been on supporting necropsies and other field research on stranded and deceased animals from this population. 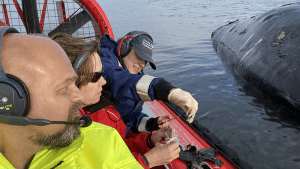 Amitava Michael Kundu for exclusive use by Shearwater Research.

Since the beginning of the UME in 2019, 578 known strandings of grey whales have occurred between the grey whale wintering and birthing grounds in Mexico, and their migratory summer feeding grounds in Alaska and the Bering Sea. Grey whales traditionally migrate between Mexico and the North Pacific every year, starting the journey in early spring, to feed on large schools of crustaceans, amphipods, and copepods in the North Pacific. Grey whales are a resilient animal. As their traditional prey numbers in the Arctic feeding grounds decline, researchers are finding that some of their numbers now appear to be shifting to other prey species, such as krill and herring. They're also truncating their regular 19,000 to 22,000 kilometre migration to stop along inlets and regions off the West Coast of Vancouver Island and the Puget Sound, where lesser competition, and large number of alternative prey species still exist.

The cycle includes greys traveling to the Arctic in the spring, feeding heavily in the summer, returning more leisurely South to the wintering grounds in Mexico in the late summer and autumn, and then conducting the cycle again the next spring. Feeding happens predominantly in the winter in the Arctic, where food is plentiful - limited feeding happens the rest of the year as greys draw from their fat stores accumulated the prior summer in the Arctic. This cycle suggests that grey traveling Northward in the spring area are already quite lean and hungry. The importance of feeding in a rich, plentiful Arctic summer is crucial each year. Accordingly, research is emerging showing that the E-DPS of greys that are succumbing to this UME, are being found as having significant nutritional stress (malnourishment), determined from the necropsies conducted on the tissues of these beach-cast animals.

Amitava Michael Kundu for exclusive use by Shearwater Research.

While the unfortunate strandings that sometimes occur in unfamiliar waters, and in whales that seem to be severely nutritionally deficit, seem to be occurring with more frequency in the Pacific Northwest, these inlets also provide more sheltered locations for researchers to conduct post-mortem work on stranded and beach-cast animals. SeaWolf supports National Marine Fisheries Service who are contracted researchers and other partner groups that often coordinate field operations with various whale stewardship groups, working the waters between Washington State and British Columbia on such matters. By collecting tissue samples, we can help to assess and understand the state of nourishment that some of these dead whales are in, and hopefully provide us a better forecast of what might happen through the cycle of this UME.

The emergent concern about this grey whale population, which represents a distinct and absolutely vital ecological representative of the near coast whale species, is the fact that their vital food source in the Bering Sea, after their 19,000km journey, is critical to sustain the massive energy requirements for the long migration that these whales are accustomed to navigating each year. Worldwide, many ecosystems are collapsing at the foundational level. What we are recording is that, in what was previously a rich Bearing Sea area, copepods, amphipods, krill, and even smaller baitfish populations, are disappearing at an unprecedented rate due to global warming.

During the winter, the Bering Sea and Arctic feeding grounds are covered with thin layers of sea ice. The light underneath this covering reduces the sunlight, which reduces the growth of phytoplankton and zooplankton under the surface. When the sun returns in spring, and at the same point that the greys arrive on the tail end of their migration, the sea ice retreat allows for a bloom in plankton, which in turn feeds the microorganisms and their prey food in the Arctic. The binge feeding that occurs at this time is very important. Before they left their wintering grounds in the South, most greys are already thin and lacking in nourishment since they generally live off the stores of fat accumulated in the Bering Sea from the previous summer’s feeding. But, global warming is changing the Arctic landscape. The sea ice is retreating much earlier than before, causing the blooms of plankton to occur earlier than the whales arrive. When they do, the rich blooms have already occurred, leaving less prey food and nourishment available for these greys after their long journey.

Our combined efforts on assessing the ocean conditions that lead to the physiological constituency, may provide some help in making public policies that may help to ease the impacts created by the larger issue of global climate change in some fashion. Greys, which migrate closer to shore, are also impacted by coastal netting which entangle them. Shoreline pollution, marine traffic, and habitat destruction also add to these dangers. As ‘filter feeders’, greys scoop large divots of sand and mud from the seafloor, filtering out their prey in the process. 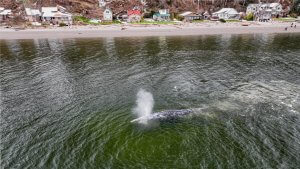 This feeding method also make them ingest heavy metals, contaminated soils, and other impurities, which in turn saturate their tissues and cause further health complications. Furthermore, limited ‘whale hunting’ that still occurs in the Bering Sea, predominantly on the Chukchi Sea side, take some animals out of the migration path. It should be noted that a few First Nations bands in Washington and off Vancouver Islands have also considered, and attempted, to resume a historical grey whale hunt from these migratory whales in the past few decades as well. At a time when the overall integrity of the entire E-DPS grey population could be at increasing risk, reducing mortality at all levels is crucial for their long-term survival.

Despite the concerns and need for action, we must remember that nature has an interesting way of ensuring that life ‘adapts.’ The small groups of individuals, which have started ‘spinning off’ during the Northward migration, may represent a geographic micro-redistribution, or behavioural adaptation, to compensate for the need for nutrition that seems to be declining in the Arctic. It may be that these individual animals from the E-DPS are modifying their century-old behaviours to meet the changing reality of their ocean ecosystems. 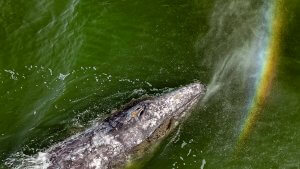 We are even seeing this kind of adaptation in Pacific Northwest orcas (a species that SeaWolf is predominantly focused upon). Southern resident orcas appear to be expanding their feeding grounds further and further South each season, recognizing that prey species may require their pods to expand their hunting range over the coming decades.

It's been said that “if the oceans die, we die,” and the grey whale, along with other charismatic megafauna, are almost like canaries in a coal mine. Signalling indicators of the health of our marine ecosystems. Groups like SeaWolf, and the partners we team with and support, must remain constantly vigilant and creative in our methods to bring vital knowledge to the table, and to subsequently advocate for the marine wildlife and ecosystems that continue to face new risks to their sustainability.

UPDATE: After the completion of this article, the federal government’s ‘Committee on the Status of Endangered Wildlife in Canada’ (COSEWIC) announced a possible plan to remove the Eastern Pacific Grey Whale population from Schedule 1 of the Canadian Species at Risk Act (SARA).

This action is being taken because the Eastern stock is now reclassified into two distinct populations; the Pacific Coast Feeding Group population , and the Northern Pacific Migratory population. Of these new populations, only the Pacific Coast Feeding stock (undergoing this UME) is being reconsidered for a federal ‘Endangered’ status, and the Canadian Department of Fisheries and Oceans (DFO) is currently inviting public input leading to a decision on the reclassification of that stock. Contact the DFO here.

Michael Kundu, environmental activist and outdoor sports enthusiast,
is the Founder and Director of the all-volunteer group Project SeaWolf.
Michael is a Canadian ex-patriot living in the United States, and aside
from his professional role as a corporate communication advisor for
the City of Seattle, Kundu writes on marine wildlife and animal
conservation issues from his home in the Cascade Mountains of
Washington State.