Why UPTD Calculations Should Not Be Used

Just over 45 years ago, in 1970, researchers at the University of Pennsylvania used the best information available at the time to derive a model for development of pulmonary oxygen toxicity.1,2 The measurement  they used was decrease in vital capacity (VC),  (VC is the volume of air that a person can exhale when starting with full lungs.)  and the data came from altitude and hyperbaric exposures to generate oxygen partial pressures (PO2) between normoxic (0.2 bar, 0.2 atm) and 0.5 bar, from sea-level exposures to 83% O2 for 50 hours and to 98% O2 for 72 hours, to hyperbaric exposure to air at 5 bar (PO2 = 1 bar) for 48 hours, and to hyperbaric oxygen (PO2 = 2 bar) for 12 hours.  From these data they described exposure to any PO2 as an equivalent number of minutes of 100% oxygen (O2) at 1 bar, the Unit Pulmonary Toxic Dose (UPTD). A median decrease in VC was associated with each number of UPTDs.

The UPTD model, like all models, did not fit the data exactly, but it seemed to be a good fit. The number of UPTD of any exposure was defined as 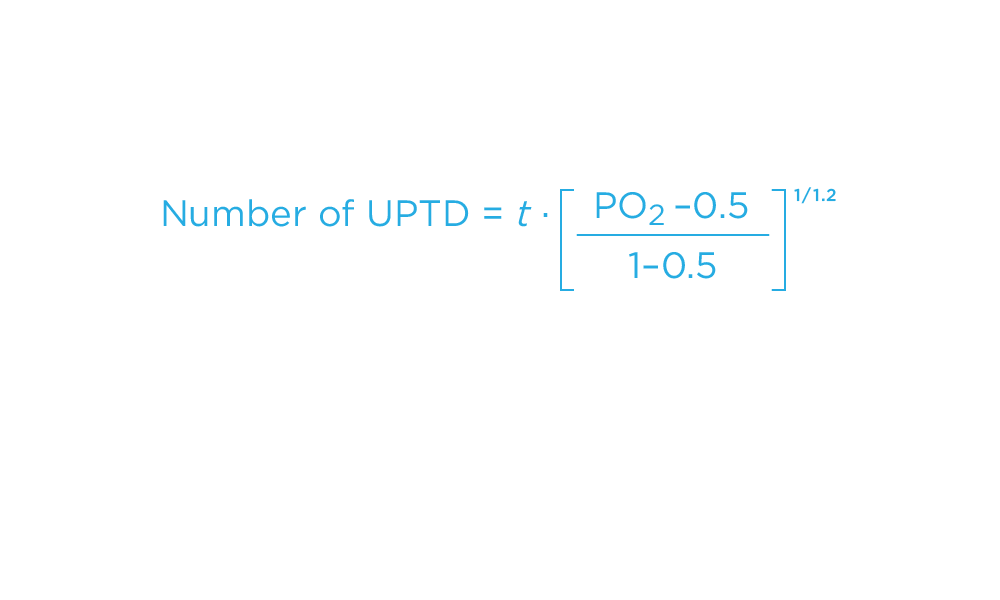 Exposures to two different PO2 during one dive could be added together for a cumulative dose. Exposures with a time separation, say, a dive followed by recompression treatment, were harder to assess; the UPTD model had no way to include partial recovery.

Many studies have been performed since 1970. Let’s fast forward.

Science progresses through the proposal of models and hypotheses that are tested initially with one set of data, retested with new data, and either disproven or not disproven. The UPTD model that showed promise in 1970 has been displaced by later evidence. It is time for the diving community to pay attention to the last 40 years of evidence. UPTDs are not a useful measure.

NOTE: Any views or opinions represented in this blog are personal and solely reflect that of the author. It is not representative of any former employer. All content provided by this blog is for informational purposes only.

Barbara Shykoff earned her B.A.SC. (Engineering Science, Chemical option) from University of Toronto, her M.Sc.E (Bioengineering Institute) from the University of New Brunswick, and her Ph.D. (Biomedical Engineering Unit) from McGill University. For the last 16 years she has worked at the U.S. Navy Experimental Diving Unit. Her principal areas of investigation have been pulmonary oxygen toxicity, some other aspects of prolonged mildly-hyperoxic exposure, and physiological effects of breathing resistance with and without inspired CO2.