Why do you calibrate a CCR with pure Oxygen?

We frequently get asked the question as to why we use O2 as a calibration source for oxygen sensors in closed circuit rebreathers (CCR).  A CCR diver often has multiple gasses available, any of which could in theory be used for calibrating the O2 sensors in the CCR.  The simple answer is that pure O2 is the best gas for a calibration source and so Shearwater computers are designed with that in mind.  As to why O2 is the best gas, read on and we will make that more clear. 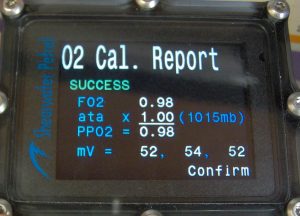 Shearwater computers use O2 as a CCR oxygen sensor calibration source for the following reasons:

It is worth expanding upon the mention of O2 sensor linearity in the above discussion.  O2 sensors are only linear for lower concentrations of oxygen, and become non-linear at high concentrations.  The usable linear range of an O2 sensor decreases with age, and when this linear region becomes lower than a PPO2 of 1.6 the sensor is no longer safe to use in a rebreather.  Even though a linearity test to PPO2 of 1.6 is not easily performed when calibrating at the surface, checking the linearity from a calibration with pure O2 to air (reading in air should show 0.21) is a prudent sanity check.  An additional linearity check of O2 sensors at a PPO2 of 1.6 underwater is also critical, but beyond the scope of this discussion.

We will also mention that the reason we use a PPO2 factor of 0.98 for calibration of an O2 source expected to be 99.9% pure is to account for some humidity in the CCR loop.  Residual humidity is expected due to the diver breathing in to it to perform loop checks prior to calibration, and this humidity reduces the measured PPO2.

We hope this explanation has helped clear up most questions regarding the use of pure oxygen as an O2 sensor calibration source.

I am an R&D Engineer for Shearwater Research, working on electronics and software for dive computers and CCR systems. I have been an avid diver for more than 24 years, and in 2014 become a CCR diver.