As I give the ‘ok’ sign to my buddy and prepare to roll over the side, I catch sight of a hazy sheen on the water beneath me and smell the distinct scent of oil. After 75 years on the seabed of Chuuk (Truk) Lagoon, the wreck of the Rio de Janeiro Maru only some 12 metres beneath me, was once again leaking oil and I knew I had come to the right place. 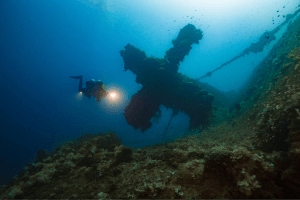 What had brought me to Chuuk Lagoon? And why, as a marine archaeologist, was I interested in leaking oil? To answer those questions, we need to travel back to 1939 and the start of the Second World War. What many people know is that between 1939 and 1945, the Japanese military and the Allied powers fought an increasingly bloody war through South-East Asia and out across the Pacific Ocean. What fewer people know is that this maritime war saw the loss of some 3800 ships which sank, taking with them their crew, cargoes, and in some cases huge volumes of toxic heavy fuel oil1 (Monfils, Gilbert & Nawadra 2006). 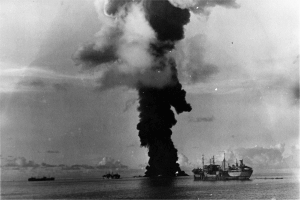 Figure 2: USS Mississinewa on fire prior sinking. In 2003 this wreck was found to still contain over 1.8 million gallons of oil. (Photo: Creative Commons)

With that being said, a question I am regularly asked is, ‘how much oil could these ships possibly still be holding today?’. In 2005, a team of international experts came together to answer just that question. Searching through archives for information on these potentially polluting shipwrecks (PPW), they calculated that combined, all of the ships lost in the Asia-Pacific Region could possibly still hold anywhere between 150 million and 1.2 billion gallons of oil2 (Michel et al. 2005)! To put this into perspective, the environmental disaster caused by the Exxon Valdez resulted from the loss of around 11 million gallons, while the ongoing devastation caused by the wreck of the MV Wakashio off the coast of Mauritius in August 2020 is the result of just 250,000 gallons of oil. 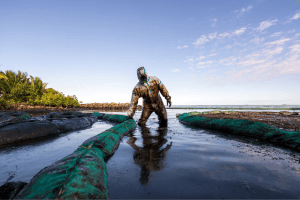 Figure 3: A volunteer cleaning oil spilled from the wreck of the MV Wakashio in August 2020. (Photo: Shutterstock)

While these disasters have been caused by modern ships, wrecks from WWII have been underwater for at least 75 years. So, wouldn’t all the oil have leaked out by now? In some cases, the answer is yes. Where a ship caught fire or suffered a catastrophic explosion most or all of the oil may have been lost when the ship sank. However, in other cases it has been found that even when the ship has been broken into multiple pieces it can still hold large volumes of oil. The wreck of the Coimbra, although broken into 3 sections, was found to still hold 450,000 gallons of oil when it was pumped out in 2019. Unfortunately, Coimbra is not alone with examples of WWII wrecks holding significant volumes of toxic oil found throughout the world3 (e.g. NOAA 2013; Salvage and Marine Operations 2012; US Navy 2004,  2011,  2019). To make matters worse, since the early 2000s corrosion scientists have been investigating the deterioration of WWII wrecks in the Pacific and have made predictions that these potentially polluting wrecks will undergo structural collapse in the next 5-10 years4 (Hamer 2010; Macleod 2016). And, that this timeline might even be shortened by the impact of storm events on the wrecks associated with climate change5 (Macleod, Selman & Selman 2017).

From the above information you would assume that these ‘ticking ecological time bombs’ would be high on the agenda of various environmental authorities around the world. While PPW are being investigated in North America, the United Kingdom and Scandinavia, unfortunately the threat that PPW pose in the Pacific has largely remained ‘out of sight and out of mind’. To counter this problem in 2018, the Major Projects Foundation was established with the goal of working with Pacific nations to protect their marine ecosystems from oil spills from WWII shipwrecks. After signing an MOU with the Secretariat of the Pacific Regional Environment Programme (SPREP), we began prioritizing the 3800 WWII shipwrecks sunk in the Asia-Pacific Region resulting in a priority list of 55 PPW deemed to be the highest environmental risk. 17 of these wrecks are located in the world-famous diving mecca of Chuuk Lagoon in the Federated States of Micronesia…

Chuuk Lagoon, formerly known as Truk, needs no introduction to wreck divers as the location of over 65 ships and dozens of planes wrecks, most dating from Operation Hailstone in February 1944 in which U.S forces decimated the Japanese merchant fleet anchored in the Lagoon. Some 75 years later in June 2019, I travelled to Chuuk to begin our assessment of the potentially polluting wrecks there and to assist a UNESCO field school building capacity amongst heritage officials throughout Micronesia in the essentials of marine archaeology. 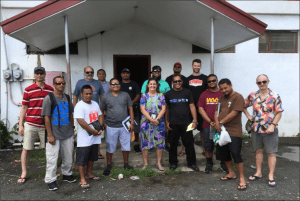 One of the key tools we used for investigating the condition of the PPW in Chuuk was photogrammetry, a process where a wreck is ‘scanned’ by a diver taking thousands of overlapping photos which are then run through a 3D modelling software package such as AgiSoft Metashape (Figure 8). From this process we are able to create accurate 3D models of the PPW.

Our main focus for this work was the wreck of the Rio de Janiero Maru as oil leaks from the wreck were thought to have impacted nearby mangroves in 2008. Launched in 1929, this 140-metre-long, 9626 ton vessel served as a submarine tender for the Imperial Japanese Navy during WWII before being sunk in Chuuk Lagoon in 1944 by U.S. aircraft. Over multiple dives, we surveyed and scanned the wreck taking 7350 photos and 3 hours of video. This was the first time that any of the wrecks in Chuuk Lagoon had been recorded in this way resulting in the 3D model shown below (Figure 8). From this survey we were able to create a baseline condition assessment of the Rio de Janeiro Maru including a hull integrity assessment that has allowed for a more accurate estimation of the amount of oil that may remain inside the wreck. This information has subsequently been incorporated into a ‘Likelihood of Oil Release’ assessment providing MPF and the Chuukese authorities with a greater understanding of the potential threat that this wreck poses. 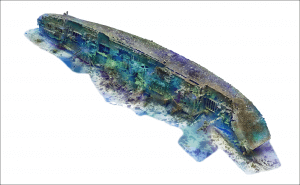 Our survey of the Rio de Janeiro Maru has shown what can be achieved through the combination of marine archaeology, technical diving, and photogrammetry. However, this is only the first of the 55 potentially polluting wrecks throughout the Pacific that we urgently need to assess in order to mitigate the impact these ticking ecological time bombs will have on the people and marine ecosystems of the region.

Dr. Matt Carter is a marine archaeologist, technical diver and the Research Director for the Major Projects Foundation. Matt has worked on archaeological projects in 12 different countries and is an International Fellow of the Explorers Club, a Vice President of the Australasian Institute for Maritime Archaeology, and the New Zealand representative on the ICOMOS International Committee on Underwater Cultural Heritage (ICUCH). Matt is passionate about combining his archaeological training and commercial and technical diving qualifications to protect marine ecosystems threatened by legacy shipwrecks in the Pacific.